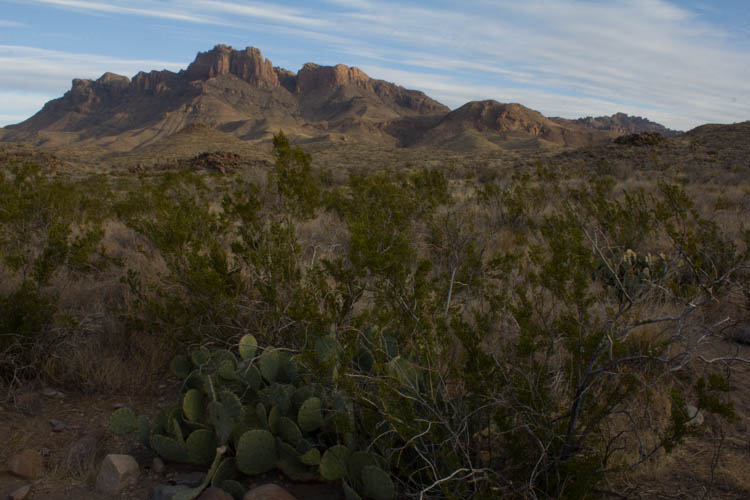 In the morning, I made pancakes from scratch, which has become one of my go-to trail recipes. It's easy to bring the dry goods around and use them for a number of things. Pancakes work well as an immediate meal and also something to keep around; they wind up being like high-protein bread due to the eggs and TVP that I've been spiking them with. 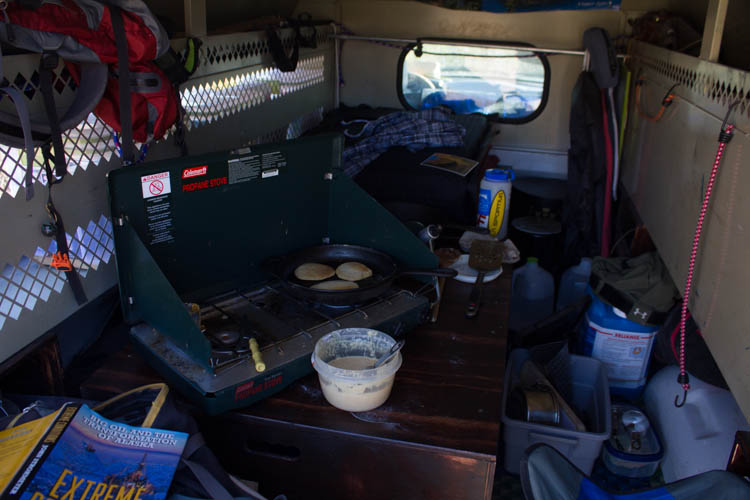 At some point soon I'll do a tour of my setup. Normally, I don't cook in the back of the truck, but on this particular day the winds were an extreme irritation.

I stayed for a few days at a campsite in the backcountry named Twisted Shoe. One of the times that I arrived at it, I pulled in behind a historian and a guide. The historian told me that this site was named after an Apache chief who'd led his tribe in a battle against the Spanish on this very spot, some 200 years or so ago. Apparently, the Apaches were being a bunch of jerks, stealing horses and taking prisoners and whatnot, and the Spanish decided they'd had enough. They chased the tribe back over the small rolling hills around the campsite, and up into Juniper canyon in the Chisos, where the Apaches escaped. I thought it was neat to learn, but I didn't have any problem sleeping easy at night. 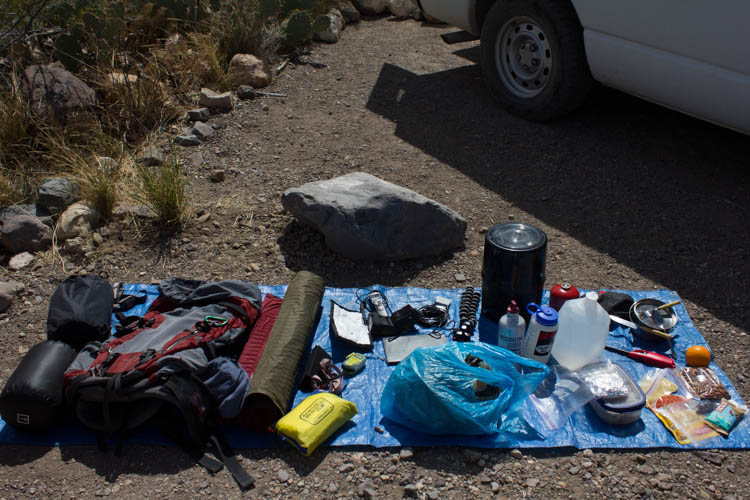 I stayed for two nights at Twisted Shoe, and a third camping in the open desert. I walked in on the Dodson trail one afternoon for a short distance: only about 90 minutes before leaving the trail. I was prompted to explore by a bird nest in a churro, and decided to look around on the hillside for a camp site. Within a couple minutes, I found a flat patch of soft gravel that was just about perfect in every way except for drainage; if it had rained that night I'd likely have had to sweep everything up quickly and move a few feet. But the skies held not a cloud, much less a threat of rain. 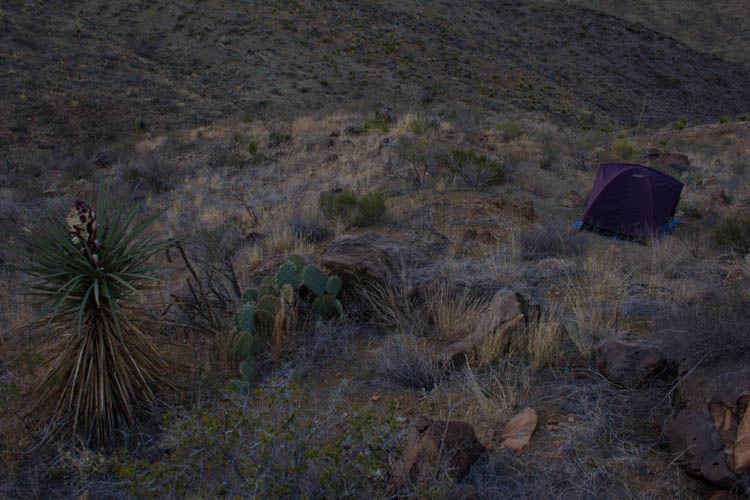 After a brief dinner at about 4:00, I hiked up the side of the small mountain I was camping on. It was an easy bushwhack, but slow going. I was in no hurry. It was more important to keep good footing and be safe than to try and summit.

On the way up, a pair of ravens flew over the silent landscape. I listened to them talking to one another, one would sing a note low, and the other would immediately cut the first one off with a high. "Baby—" "No!", "Sweetie—" "No!", "Sugar—" "No!" They disappeared away to the west. Shortly thereafter, a falcon flew overhead. I thought at first it was one of the peregrines roosting nearby, but a later consultation with the bird guide made me suspect prairie falcon instead. It was still a pleasure to watch in the quiet of the late afternoon.

I turned back without summiting. On the way down, I passed by the king yucca of the hillside, a huge specimen that must have been hundreds of years old. But the highlight of the evening—and perhaps the entire visit to Big Bend so far—turned out to be a gorgeous yucca in full bloom, one of only two or so on that whole side of the mountain, being kissed by the last rays of the sunset. I felt privileged to be there to see it, and to try and photograph it. 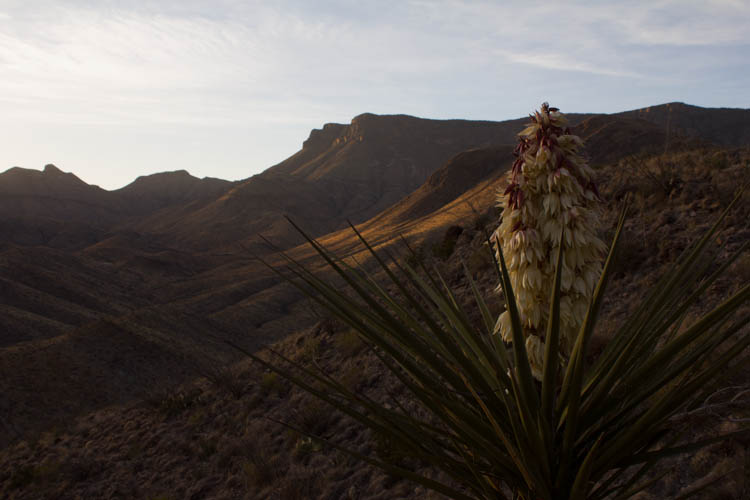 The next morning I awoke, had some leftover pancakes, and made my way back to the truck. By the middle of the afternoon I had made my way back into the most developed part of the park, the Chisos basin. I treated myself to a dinner in the lodge restaurant, and a couple hours chatting with the bartender, Ed, who has been skipping from park to park, working various jobs in the most beautiful places America has to offer, for about 13 years. Smart man.