Finally, setting up the project! Let's get coding.

Because I'm making this game to learn and experiment, not to make money, I'm doing it publicly. The Github repository for my project is here. Feel free to pick it up and build or inspect it if you'd like.

The first thing I needed was a scene for a main menu. I emulated the technique used in the Space Shooter tutorial for creating my background and buttons, but this was an awkward way to create a menu screen. Instead, I believe that the best way to create a pure menu screen is by using the GUI scripting API. This lets you locate things more directly and intuitively by referencing pixels on the actual screen rather than positioning objects in the world where the game will take place. 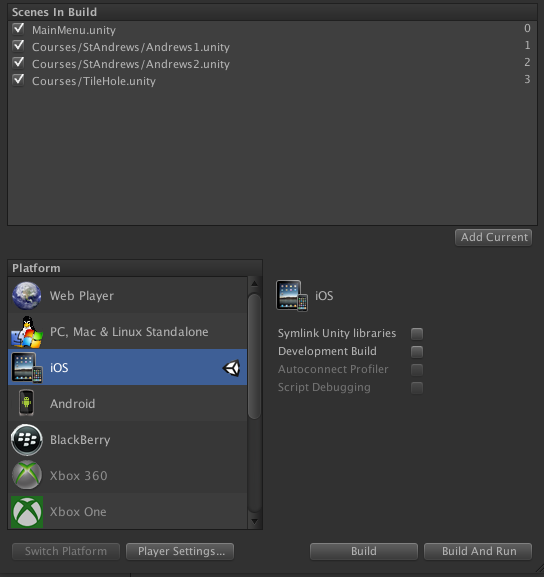 The current state of affairs is that we must make App Icons and splash screens in a host of different sizes. I used this handy template to make it easier to export an icon in all the sizes I need; but actually only wound up using the largest one and dragging it to all of the different sizes in the inspector panel.

You can see here that the icon is a little odd, a planet. I was originally planning on using a theme of "golf in space," and calling the game "space golf" or something similar; but a quick web search revealed that, unsurprisingly, "space golf" already exists and may well be trademarked. It's not that hard to think of a distinct name and theme, so I abandoned space as a setting and promised to revisit it once I had the mechanics working well.

After doing these basic steps, I had a project which compiled, showed a menu screen, had an icon, and no real warnings in either the Unity editor or XCode. Next it was time to make it do something.