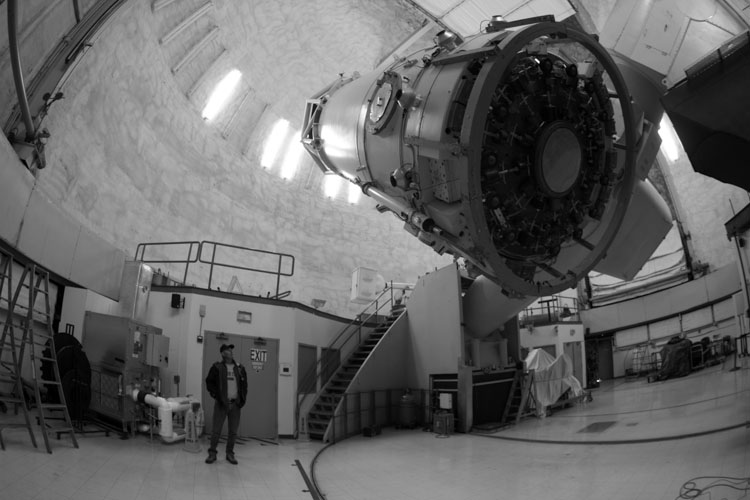 When I awoke, it was still early and very cold. I wanted to return to the office and see if David was still there. I felt bad that I'd spent so much time the day before talking to people with such interesting stories, and hadn't taken any portraits or done anything to capture them. For years, I've imagined doing a project which would gather little bits of stories from random people and combine each with a simple portrait of that person. It'd be a wonderful—if uncreative— project.

But it was so cold! I decided to drive just to get the heater on. The project will start another day, after I've gotten some other things done first.

The prettiest looking route went North from Ft. Davis, past the University of Texas' McDonald observatory. As I passed it, I decided to stop. I wound up staying until about 2:00 looking at exhibits and taking a tour which visited the two most notable telescopes on top of the mountain. I'd never been to an observatory before, so I didn't know what to expect. It was interesting and informative, although it also spent a lot of time talking about things I was already familiar with, like the scale of Earth vs. the Sun and so forth. (But I did not know this: if the sun were the size of a period on a page, then the next nearest star to us would be about nine miles away. Space is big.)

The rest of the day was spent driving to Hueco Tanks State Park, where I arrived at about 5:00, an hour before the gate is locked for the night. I got a campsite for a few days and got to bed. Tomorrow: climbing!