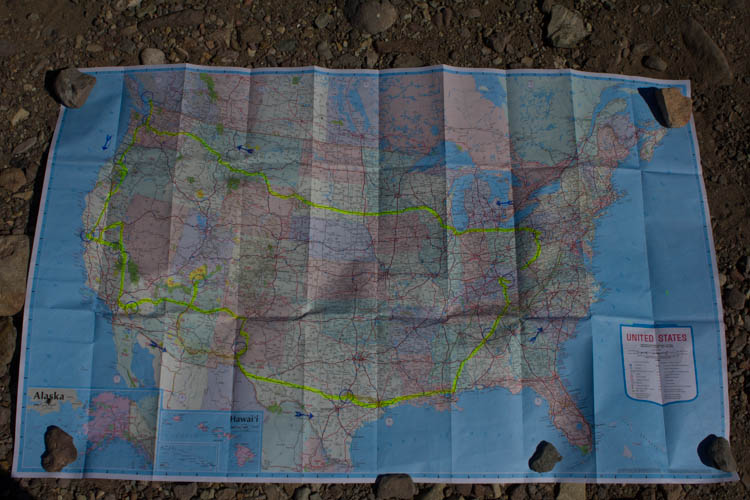 I made a list of destinations I wanted to hit, a variety of rock climbing, hiking, and photography spots as well as some cities and friends. When plotted out, they more or less made a loop around the continental US. So! Off I'd go. An obligation or two kept me booked through early January 2013, and then I'd set out in the middle of the month. It's hardly vacation season, but that meant as much as anything that campsites would be cheaper and always have a spot for me; that I'd have the wilderness more or less to myself; and that I'd be seeing things in seasons that most people avoid. I've visited Yosemite in both March and July—there's no doubt that March was the better trip by far, for all those reasons.

In fact, I was so excited to travel in the winter, that I aimed myself tentatively across the northern high plains first, stopping to see a friend in Vancouver, and then work my way south through Oregon and California. Then I'd cross the southwest and aim to be in Austin, TX in mid-march for South by Southwest. I have such fun memories from immersing myself in music there for three days in earlier years.

Family and friends advised me to go south first, though. It took a long time for me to listen, because I didn't want to make the decision based on mere discomfort. I have experience with winter camping, and a bit of cold doesn't bother me. I want to go snowshoeing! But when I looked at what the average temperature is in North Dakota in January: 17 degrees fahrenheit. The places I was looking at would likely be so cold that they wouldn't be above freezing at any point in the week. Without proper shelter and heat, those temperatures, combined with winter storms aren't just uncomfortable—they're dangerous. (All the more by myself) All my water jugs would freeze, as would the locks of the doors. Batteries wouldn't work well or recharge. I could easily be stranded by a storm if I didn't pay close attention to the weather reports and get to a motel when bad weather comes through...

I changed my plan to point south first.