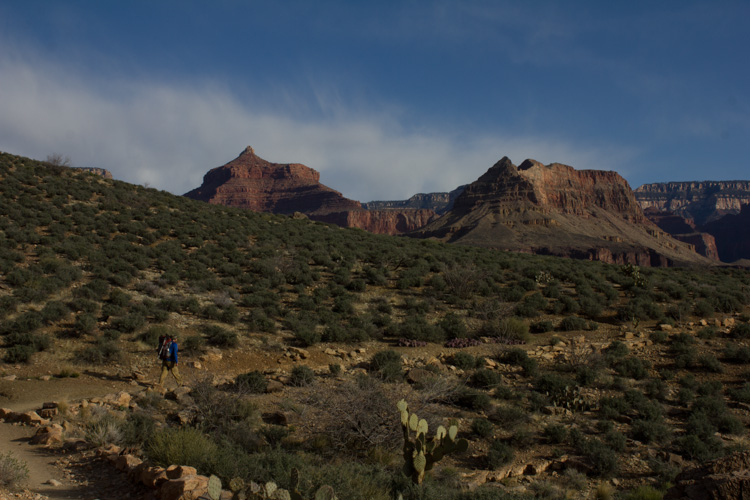 The next morning, I myself went out to the scenic vista, about 45 minutes away, and in the opposite direction as the trail out. When I arrived, I was rewarded with a long time to enjoy the spot. I shot a little video of it.

I started by myself, but was joined by a few people, and then by a special visitor, a California Condor. I had no idea they were being introduced to the canyon, and had never seen one in the wild. I was tickled. This was one of, what, 200 individuals in the entire world? I didn't rush back to the trail. 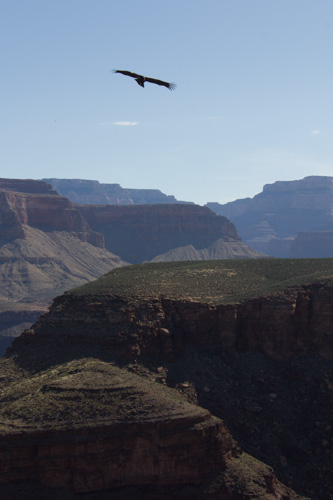 When I finally did slip away, I struck a much more leisurely pace than the day before. I summited again at 2:30, at the outside edge of my estimate. I always make estimates of my speed and arrival times when I'm hiking, the better to gauge when I might be getting into trouble.

I really regret that when I passed a set of day hikers on their way down to where I'd started, I encouraged them to go to the beautiful Plateau Point. But that was a bad, irresponsible mistake. They had no lights of any kind and were not prepared for the cold that would come after sunset. At 1:00 in the afternoon, they had several hours to go to get to where I'd started at 8:30 or so, before they'd need to turn around and return to the rim. I should have told them how far behind a safe schedule they were for their goal, a good 6-8 hours. Hopefully they exercised some sense and turned around at 3:00.

At the rim, I saw lots more examples of people being idiots, whole gangs of high school or college kids roughhousing at the edge of the canyon, joking and fake-throwing each other over the edge. It made me sick to watch. That was a very real death fall they were horsing around with. I mentioned it to a ranger, who said that it happens all day, every day, and that eventually they just grew blind to it. Legally speaking, there's nothing they can do to punish idiocy in adults, unless it involves negligence towards children or something. She also said that it's a surprisingly small number of people who actually die each year from doing stupid things at the edge of the rim—small, but not zero by any means.

There were numerous pairs of young girls/women posing for pictures at the rim in sexy or cute poses. I thought it was pretty funny to watch them take picture after picture of each other, now with the jacket on, now the jacket off but the backpack on, back arched, lips pursed, now a cute smiling one, now with their backs turned, on and on... so I grabbed one of them and made her take a similar picture of me. 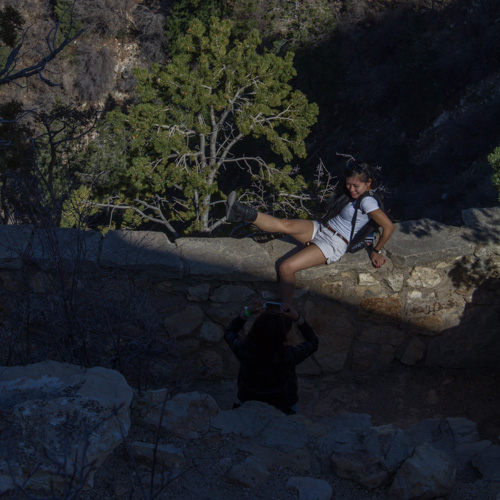 I got a huge kick out of this picture, knowing that I had a hard-earned stench radius of at least 10-15 feet and was as completely opposite of anything they considered sexy as you could imagine. 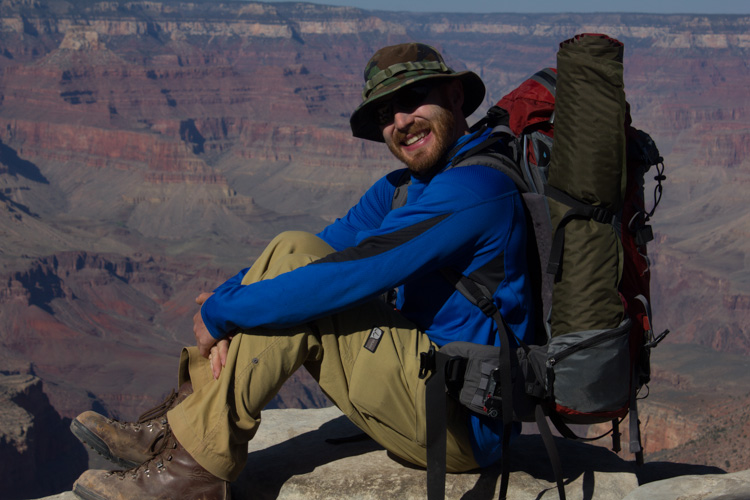