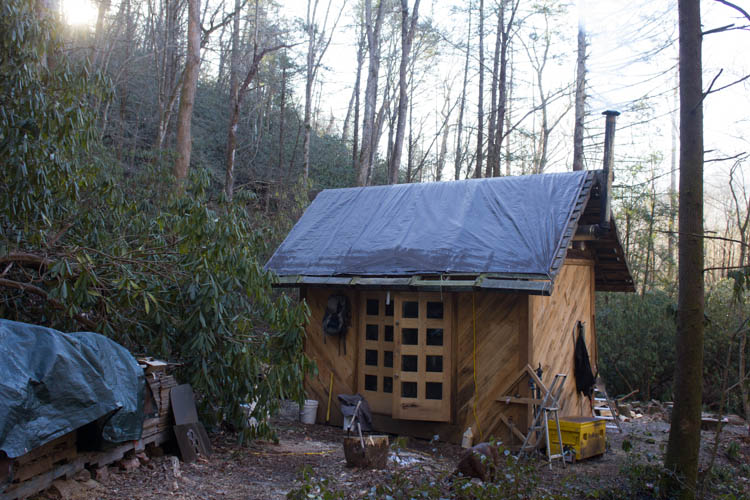 My aunt and uncle are surrounded (in a manner of speaking) by other woodsy folks. But perhaps none are as fully committed to the forest lifestyle as the man who dropped by one night when I was visiting. Thomas doesn't really have an address in the traditional sense, so when he's receiving packages, he has them sent to (for instance) my relatives. He had one or two waiting for him, so one night he stopped in.

Thomas is considerate, almost to a fault, and charismatic. He opened one of his packages: a new set of straps for his backpack. After asking permission, he eagerly attached them to the frame, replacing an old and seriously worn set. He began telling a story about the last thing he'd tried to haul out and then suddenly stopped, and looked at me: "hey, would you like to earn some money?" I listened.

It turns out that Thomas' generator had broken, so his cabin had no power. To make matters worse, when he tried to strap it to his pack and haul it out, he'd fallen over backwards, like something out of an old cartoon. His plan was to replace it with a pair of smaller, more manageable generators that could be linked together, but in order to pull it off, the old one had to come out of the woods. That was no small task. I agreed to help, at first taking him up on his offer of payment before being politely corrected by my uncle and realizing that of course there was no need for that. I was eager to see his place. Oh, tonight even? Well, sure, I guess that makes sense. Let me go get my stuff...

Thomas' property is surrounded on all sides by national forest service land; in order to access it he must drive back on old, lightly maintained (at best) service roads that cost a small fortune to even have access to. But once he's at the end of the road, and has hiked in an additional quarter mile or so (descending sharply) a small clearing opens up by a couple of streams, and therein sits a beautiful handmade cabin. It's not of logs, but mostly shipping pallets, which he's carried in bit by bit for years.

A better storyteller than I am would have related in rich detail the drive back to his place, the condition of the roads, the way the car often floated, all four tires moving laterally at the same time. And then he'd mention the baying of a pair of hounds in the inky woods at night as we approached the building, and would have passed along the tinge of possible fear he felt, being led back to who-knows-where by someone he'd met mere hours before. But I'm not that storyteller, so you'll just have to imagine what it might have been like. 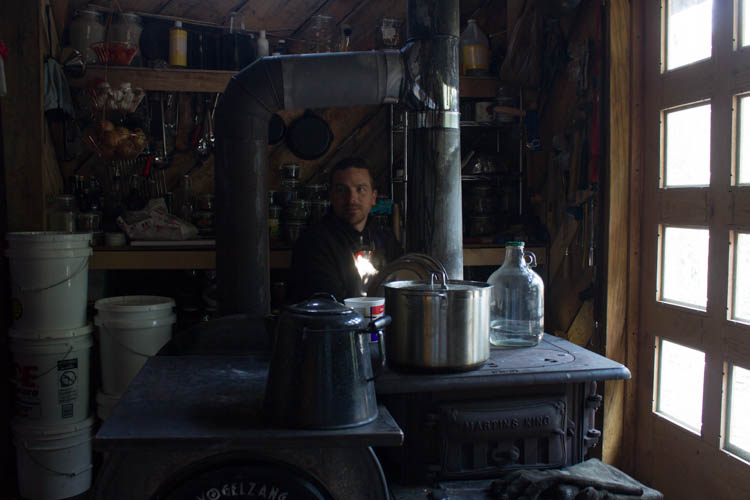 A large drum anchors the cabin and has been converted into a wood stove by what appears to be a magnificent kit. When it's been restocked with firewood, it pays out a pleasant smoldering heat that fills the entire space, unfinished roof and blanket-covered doorways and all. We swapped stories over good Belgian brews long into the night before retiring, Thomas in his loft above and me beside the dogs and the wood stove. I slept soundly and well.

In the morning, he took the time to prepare one of the best breakfasts I've ever had, honestly. It was bacon and eggs on a bed of arugula with fresh lemon and pepper as a dressing. (I ground up peppercorns in a mortar and pestle.) There was a garnish of salt and ground up habaneros, which he has a supply of that would last me for about a decade. Following breakfast and a token rinsing of dishes, we toured his estate, which was a lot like taking a short walk in the woods. 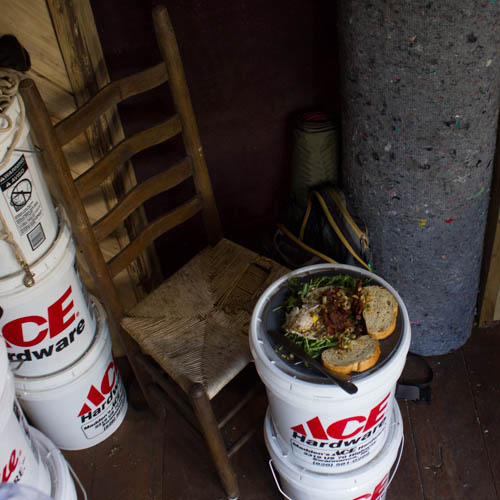 After the tour, and some discussions of garden and wild herbs, (literally, not marijuana) Thomas sat down on a log and rolled himself a cigarette. I was beginning to feel a bit antsy--shouldn't we be figuring out how to deal with the generator? There was no mention of the task from Thomas, indeed not a single word. Instead, after a minute or two he rose, walked to the side of the cabin, and reached into a tool chest to retrieve the biggest and most ferocious chainsaw I've ever seen!

"So this is it," I thought, half-joking with myself, half-serious. "Hacked to bits in the backwoods of North Carolina by a charming lunatic. Well, it's not my first choice on how to go, but I've had a good life and can't say that I'll leave with many complaints." I assumed that there was no chance to outrun him on his own property, even if I'd known clearly which way to go.

Fortunately, the chainsaw's bite was not for me that morning; a pair of holly trees on the edge of the clearing met their demise instead. When they'd been trimmed of all their limbs, we lashed the resulting poles to the top of the Honda, creating something Thomas dubbed, "the ark of the generator." I explained the scare he'd given me by going silent for the first time right before grabbing the chainsaw, and we both laughed about it. Down to work! 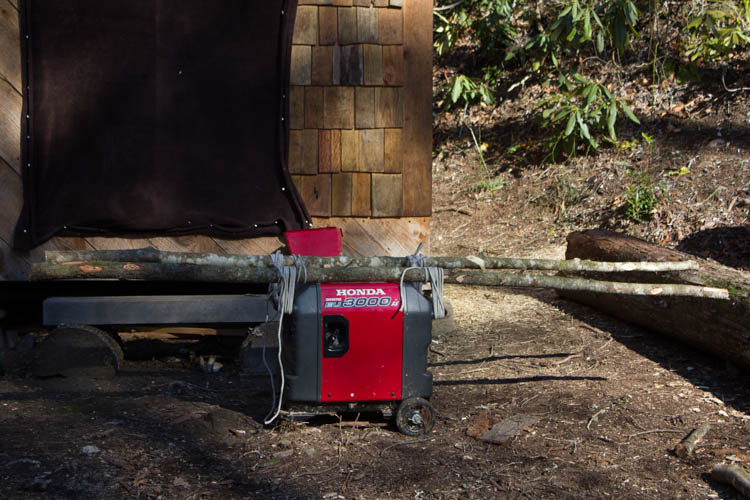 The haul itself went smoothly enough, though it was an honest struggle. I was impressed that he'd even considered trying it himself, much less actually loaded up for it. The rich black soil is great for roots, and challenging for bipeds. But fifteen or twenty minutes later, it seemed, we'd gotten through the worst of it and gotten the weight loaded into the back of his car. We took a meandering course back to the cabin, and Thomas showed me his detailed plans for trails, orchards, additional structures, and everything. It's a lot of work!

After a lesson in how to split wood with an axe (as opposed to hammers and wedges, as I've done it in the past) he led me on a trail which would take me to a col, with my family in the valley on the other side. We shook hands and parted, with his gorgeous dogs loosely following me up to the edge of the ridge before I left them behind. I was glad to be home, and to have had such a great first adventure! I hoped it bode well for the rest of the trip.

Upon reflection, I don't know quite what to make of the Thomas lifestyle. Anyone who's heart is in the great outdoors will have contemplated it; certainly I have. There's a purity to be had in turning back the clock about 150 years and working the land honestly to make your place in the world. But make no mistake: it is a LOT of work. It's all too easy to consider things in the abstract, without having an understanding of just how many hours you'd spend moving logs around by yourself, or how long it would take to get into town when you need new tools or supplies.

We all make a choice about how to live and what we'll use; as Thomas says, unless you're willing to make your own stone tools, wrap yourself in the skins of animals you hunt yourself, and make fire from two sticks, we're all living in the modern world. The thing is, I think he's seriously considered the alternative.